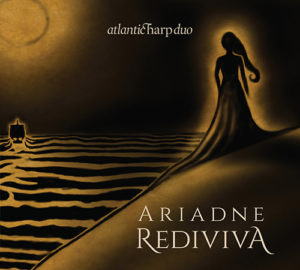 The rich imagery of Ariadne’s world and her experience of love and abandonment are the inspiration for the music of this album. Two harps bring to life these myths from Ancient Greece as well as the Mother Goose Tales by Maurice Ravel.

Select a payment option to place your order. All orders include free shipping.

Order the digital version from Bandcamp. 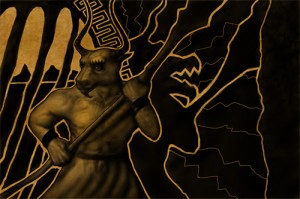 Ariadne’s tale of love and despair begins with her youth on the isle of Crete. When the Athenian hero Theseus makes his entrance onto her scene, she is instantly enamored. She deviously sneaks him a thread to help him navigate the labyrinth on his quest to slay the Minotaur – a fearsome cross between man and bull who lurks at the heart of the maze. After Theseus emerges victorious, Ariadne sets sail with him on his return to Athens, but along the way, the young lovers are forced to take refuge from a storm on the isle of Naxos.

Following the storm the next day, Ariadne awakens to find that Theseus has sailed on without her. The despair of abandonment is almost too great for her to bear, but just when she has given up hope on living she is saved by the jolly and resplendent figure of Bacchus – god of wine and fertility. He makes her his wife and presents her with a splendid gold crown at their wedding. 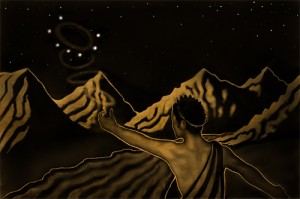 Alas, as with all mortals, Ariadne’s song must come to an end. Mourning her death, Bacchus launches her crown into the sky, where it becomes the corona borealis constellation. Thus immortalized, Ariadne rests, a cluster of stars up in the night sky, forever shining and dancing above, singing to our mortal souls from on high.

Sound engineering, mixing, and mastering by

Made possible in part by all of the crowdfunders who supported this project, Access Contemporary Music, and by the American Harp Society